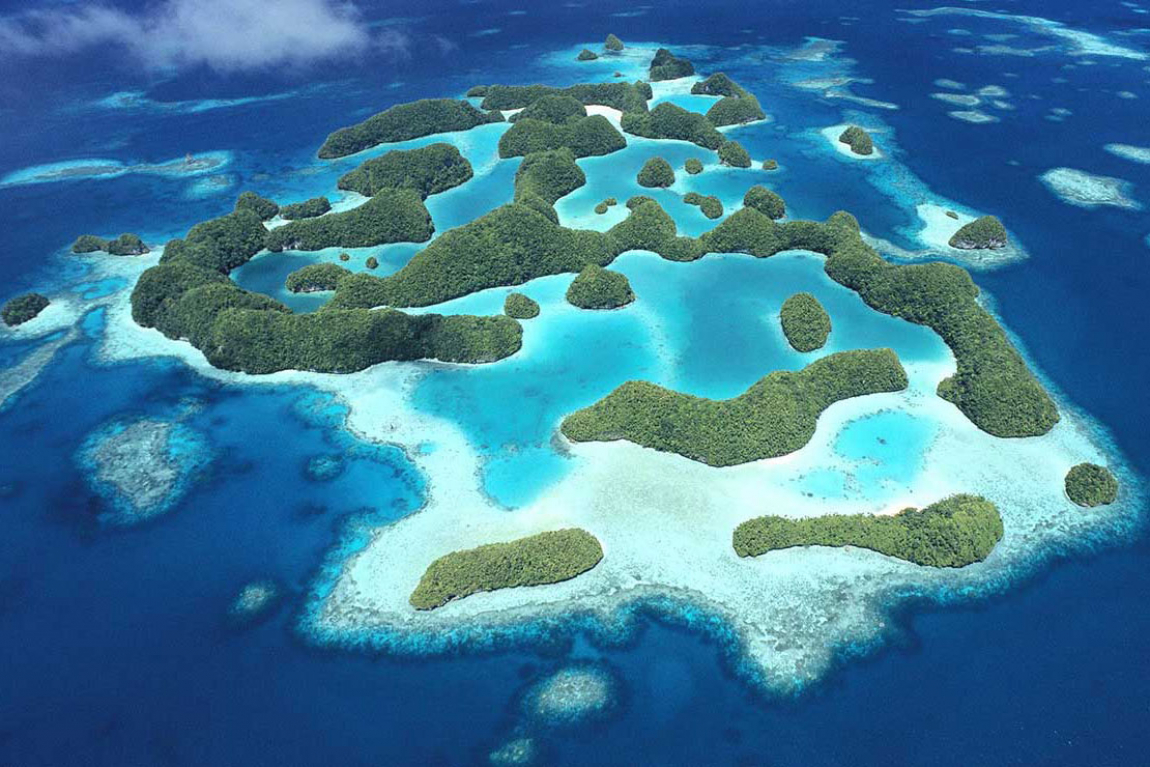 WHY SHOULD GO AND DIVE PALAU ISLANDS AND MICRONESIA?

Diving in the last pristine paradises on Earth: Palau!

The Republic of Palau includes 200 islands lost in the Northern Pacific Ocean, 650 km southeast of the Philippines. A diving destination offering a variety of attractions; large schools of fish, a large number of sharks, beautiful and perfectly preserved coral reefs, wrecks from the Second World War, the famous lake of stingless jellyfish. All this makes Palau one of the best diving destinations in the world.

The Palau reefs are located on the convergence of 3 of the major marine currents on the planet, which entails a unique nutrient richness of its waters, with a consequent agglomeration of marine life and great biodiversity. The sea of ​​Palau is home to 1,500 species of fish and 700 species of corals and anemones. The dives are carried out on infinite walls sinking into the blue, covered with soft corals and sea fans, literally covered with clouds of reef fish, while in the blue, you can see a large number of sharks, manta rays and pelagic fish.

The dive sites of Rock Islands

The Rock Islands are the supreme glory of Palau. More than 200 of these jungle-covered limestone bumps dot the waters for a 35km strip south of Koror. Their bases, having been consumed by the action of the tides, are narrower than the upper part making them look like mushrooms with emerald shades that arise from a turquoise sea.

From above, they are a crash, and it is worth, even if only for the view, to take a flight from Koror to Angaur or Peleliu. But it is the waters that surround them that make the Rock Islands unique. Immerse yourself and you will find yourself in one of the most abundant and rich marine life environments imaginable. Ngemelis Wall is one of the most beautiful diving walls in the archipelago. Starting with the water at the knees, it plunges vertically for about 300 m, and shows the bright rainbow of sponges and soft corals whose intense colors form the background for quivering sea fans of 3 m and giant trees of black coral. Blue Corner is the most famous dive site, where you can expect to be dazzled by an incredible variety of fins and natatoies, sharks and barracudas, soft and hard corals. Inland, Jellyfish Lake is a marine lake, made famous by Medusa, a National Geographic TV television special, where millions of tiny stingless jellyfish seem to dance in unison. Some of the Rock Islands have soft white sand beaches where you can laze after a dive, while others allow themselves to be admired for the caves with stalactites, rock arches and underground canals; moreover, the Island of Ulong is known for the presence of ancient cave paintings and the cave near the Airar Channel for the semi-carved Yapese stone coins ... and, yes, also for the crocodiles.

Some of the bloodiest battles of the Second World War took place in Peleliu. Although it has an area of ​​only 13 sq km, in two months there were over 20,000 injured, a number greater than the current population of the whole country. During the fight, the Peleliu forests were completely burned, but today the songs of birds reverberating in the thriving jungle again. If there were no occasional forts, rusty tanks, eyewitnesses and monuments to the fallen to keep their memory, one could almost forget the island's violent past. The main places of interest on the island are the war relics and the seabed. There is a small war museum in the main village, Klouklubed. Peleliu Wall, in the south-west of the island, is one of the most beautiful diving sites in the world, with a sudden descent of 300 meters and huge quantities of sharks, hawksbill turtles, colossal sea fans and an amazing variety of fish. Both White Beach and Bloody Beach (with an unfriendly name) are good for snorkelling.

The best diving season in Palau

Palau's Rock Islands are a destination that offers great dives all year round. The rainy season runs from May to September. The rest of the year is considered a dry season, but it still rains on average one day a week. The water temperature is 28-30ºC - 82-86ºF all year round.

To visit this destination, cruises of 7 or 10 nights are available, or stays in resorts or hotels with daily diving excursions.

Palau Aggressor and Rock Island Aggressor are two identical boats, 35 meters long, stable and comfortable, have 9 cabins for up to 18 divers, all cabins have private bathrooms and air conditioning. A large lounge where meals are taken and a sundeck form the common areas. The Aggressors offer 07-night cruises, and some during the 10-night year.

If Palau, although remote and difficult to access, already has a number of lucky visitors, the other islands of Micronesia are practically forgotten by tourism. A chain of small islands, spread over 3 million km2 in the Pacific Ocean. The total area of ​​all the islands is less than that of the city of Los Angeles. Ideal for those who have time and want to leave all tourist circuits.

The dive sites of Kosrae

The small island of Kosrae, 110 km2 and 6,600 inhabitants, is located between Guam and Hawaii, in the middle of the Pacific Ocean, 600 km north of the equator. The island is mountainous and covered with forests, the coral reefs are in excellent health, thanks to the forward-looking policy of the local government and the distance from the other islands, which makes it difficult to reach it. In addition to diving, you can go hiking to the indoor waterfalls, a kayak ride through the mangroves, visit the remains of an ancient stone village in Lelu. The Nautilus Resort is an excellent base for your stay.

The diving sites of Pohnpei

Pohnpei has 334 km2 and 34,000 inhabitants, and is the most populated island in the federated states of Micronesia. The highest mountain reaches 800 m. The inhabitants are considered the most welcoming in all of Micronesia. Pohnpei has great biodiversity, and is one of the rainiest places on the planet, with 7600 mm of rain per year. At the level of diving there are lagoons and many passes, where it is easy to meet sharks, barracudas, jackfish, manta rays and reef fish. Of course it is a destination for a few, always because of the distance and the costs. Mangrove Resort is the best solution for divers.

The dive sites of Yap

The island of Yap is located east of Palau and is famous for manta rays and sharks, as well as stone coins, which in some cases reach 3 meters in diameter. Flat island, surrounded by coral reefs, it offers excellent macro as well as large fish. The Manta Ray Bay Resort is an excellent base for diving outings.

The dive sites of Truk (Chuuk)

Truk or Chuuk, is known to be the place in the world with the largest number of wrecks, over 60, caused by one of the biggest battles of the Second World War. The Truk lagoon is surrounded by coral reefs rich in shapes and colors, the wrecks are often covered with beautiful soft corals. It is a particular emotion to see clouds of fish swimming among the remains of trucks, bicycles, pieces of planes, and provisions that were part of the sunken fleet. Wreck-based dives also offer macros, reef sharks, and reef fish. The waters of the lagoon are warm and clear. Some wrecks are found in shallow water, while others require technical diving. Cruises and resort stays are available in Truk.

RESERVE A DIVING TRIP IN MICRONESIA