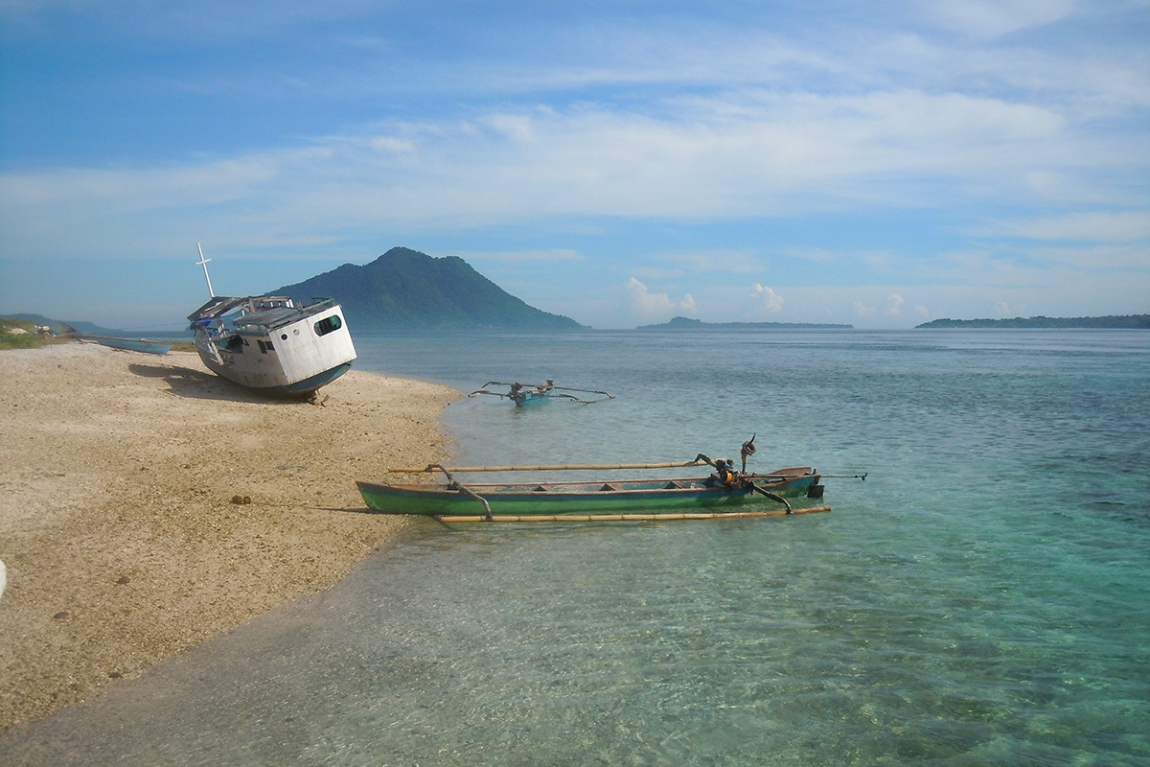 Remote and unspoiled, the 18 islands between the archipelagos of Solor and Alor are considered among the most beautiful diving destinations in Asia. Tourism almost does not exist and only a few divers have explored these waters. One of the very last traditional whale hunter communities on the planet still lives in these magical places. Alor belongs to the Nusa Tenggara, however it is located within the Banda Sea platform, therefore large marine fauna and pelagic fish are common encounters during dives between the straits of Alor and Flores. 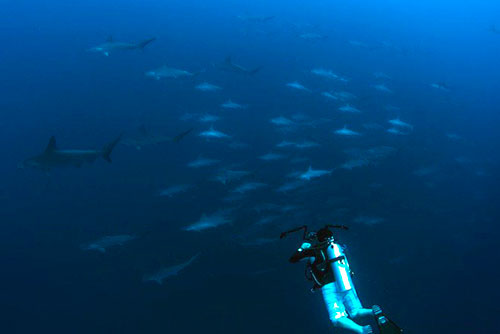 THE STRAIT OF ALOR

4. WHERE TO STAY TO DIVE ALOR

5. OTHER ACTIVITIES BESIDES DIVING

Why is so amazing the diving in Alor and Solor Islands Group? 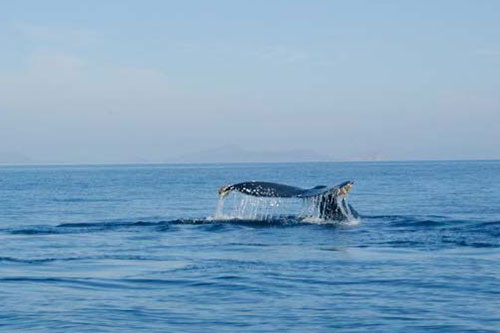 The waters around the islands of Alor and Flores are known for their strong currents, particularly in the relatively narrow strait between Pantar and Alor and also between Lembata and Pantar, with each tide large water masses are pushed through the straits causing strong upwelling. The straits between Alor and Solor play an important role in the exchange of marine life between the Indian and Pacific Ocean, a natural migratory path for the big marine fauna: marine mammals and pelagics, where whale watching is breathtaking. Otherwise, the two oceans are divided by the long chain of Sunda islands, which runs for thousands of kilometres from Sumatra to New Guinea. The difference in height between the two oceans often causes unpredictable currents, dependent on tidal movements. The richness of nutrients carried by the currents makes the seabed among the richest in marine life in all of Asia.

Underwater Scenarios between Flores and Alor 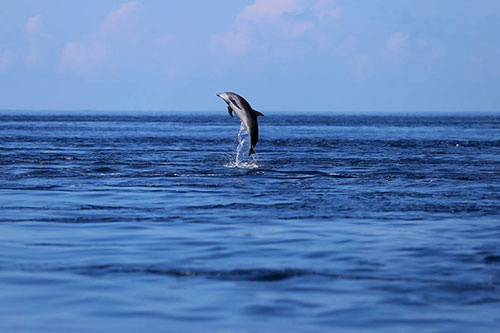 Dive cruises depart mainly from the port of Maumere, on the island of Flores, which is well connected by air to Bali. The bay of Maumere is a diving destination in its own right, the dives are fantastic, impressive walls covered with sea fans, soft and hard corals. In deeper waters large pelagic are found, while in shallower waters small reef fish and bizarre marine creatures or "critters" represented the marine life. Maumere has recovered very well after the devastating tsunami of September 1992, which hit and destroyed almost all the reefs in the bay. Sailing to Alor, the islands of Adonara and Kavula also offer good diving in a large variety of wall landscapes, drop offs, caves, pinnacles, beautiful coral, large fish and critters. Some bays are home to a good number of Rhinopias and excellent macro.

Large schools of dolphins, pilot whales and false killer whales are common encountered in Alor, many times all together on pods of blackfish. In season whales migrating towards the Antarctica and even killer whales. The Mola mola rise back from July to September, the hammers are present together with the barracudas and tuna. Thresher sharks are often spotted. Excellent macro is found on the beautiful walls and sandy bottoms of the Bay of Alor.

Numerous dive sites in Alor offer even the most experienced diver an unforgettable muck diving experience. From the pegasus seamoth -pegasidae-, to the mimetic octopus -thaumoctopus mimicus-, from the Rhinopias, to the pipefish -Solenostomus paradoxus-. Beangabang Bay is famous for its breathtaking dive nights. Coral reefs are mainly found along the northern coast of the Solor and Alor archipelagos island group with some coral reefs lining the channels between the major islands. 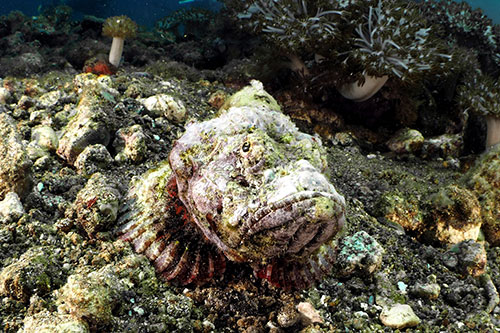 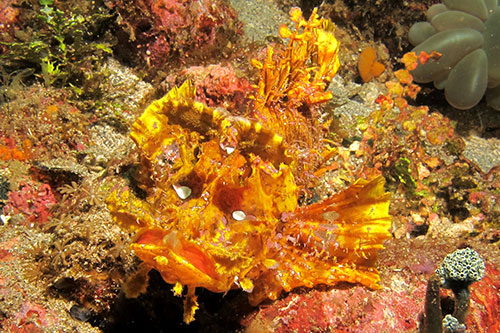 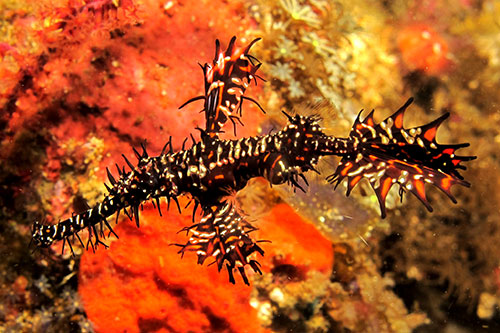 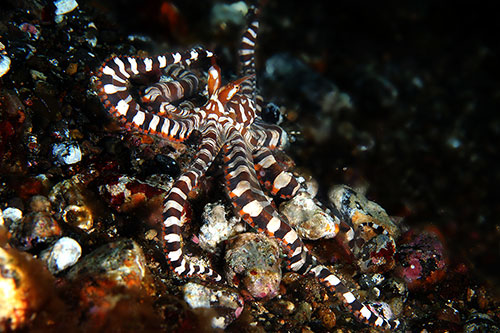 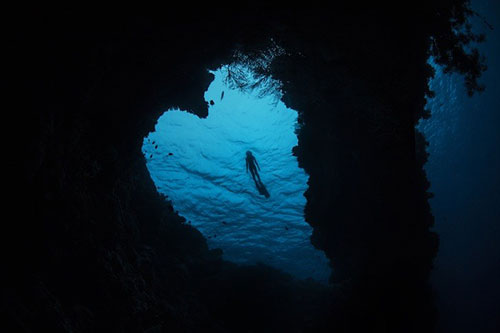 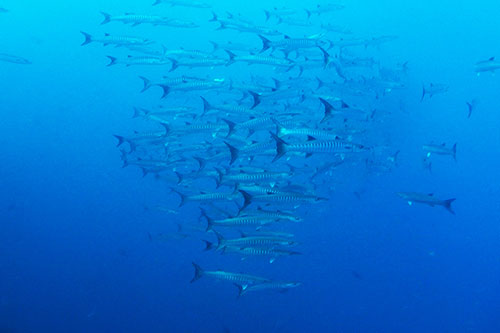 Diving season: From April to November. Rainy season: December to March. Water temperature: 28°C, with lower temperatures in the south during the months from June to September, in some dive points up to 19-20°C, then a 5mm long suit is advised and hood and booties are strongly recommended. Visibility: 10-40m. Depths: 5- >40m. Currents: On some dives in the strait can be very strong. Surface conditions: Calm, but from June to September in the south the wind can make the sea rough. Experience level: All levels, except some drift dives which are for experts only. Dive sites: >20. Length of stay: 7-10 days on a diving cruise or in one of the following diving resorts: Alor Divers, Alami Alor and the new Savu South Sea Resort. The Alor region is the departure/passage point for cruises to the Banda Sea. 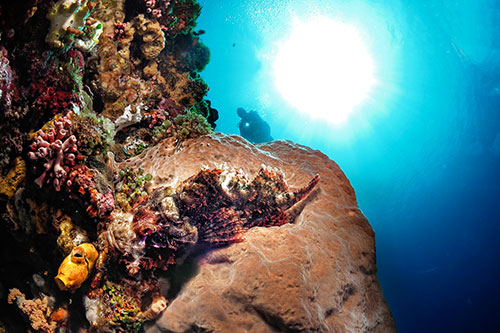 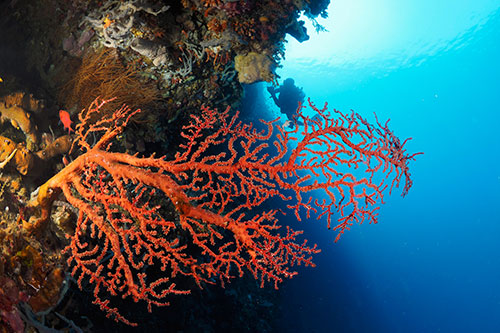 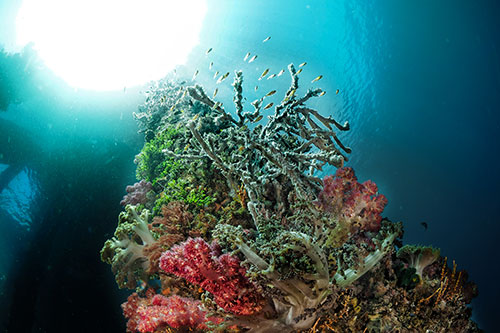 Airport: The reference airport is Mali in Kalabahi, connected to Jakarta, Surabaya and Bali, with transit in Kupang. Cruises depart from Alor or Maumere; cruises to and from the Banda Sea depart from Maumere, Alor, Ambon, and Saumlaki. All ports are connected by direct or transit flights to Jakarta and Bali, which can be reached by international flights. Weather: 27-32°C. Semi-arid climate with little seasonal rain, usually between January and March. Time zone: Lesser Sunda Islands GMT +8. 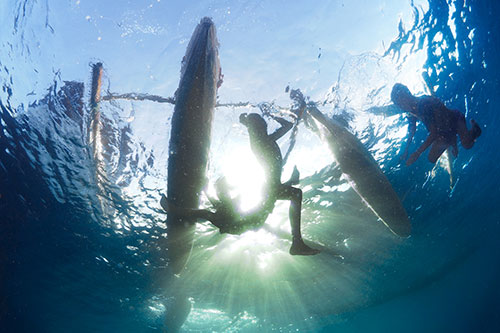 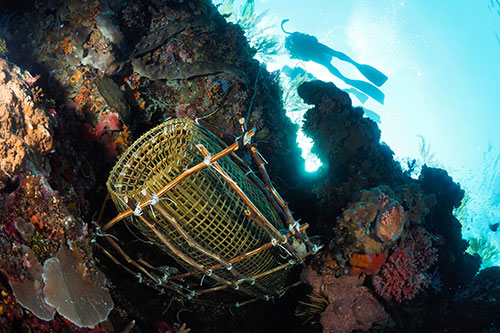 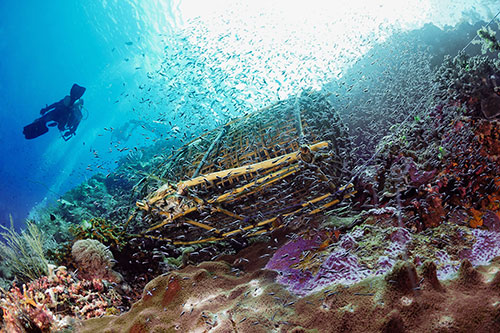 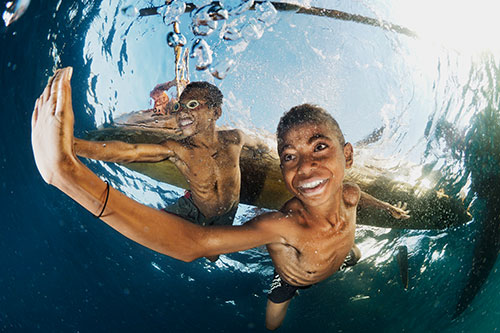 4. WHERE TO STAY TO DIVE ALOR

The archipelagos of Alor and Solor are still among the most remote diving destinations in the Indonesian East, accessible from liveaboard or from one of the three diving resorts operating in the region: Alor Divers Eco Resort, Alami Alor Dive Resort or new Savu South Alor Resort. Follow the link to book or see details of each resort.

5. OTHERS ACTIVITIES BESIDES DIVING IN ALOR

The landscape is characterized by volcanic islands, inhabited by some of the kindest and most hospitable populations of the Indonesian archipelago. In some villages the inhabitants still practice whaling with ancestral methods, while the women weave the precious Ikat, a traditional multicolored fabric. Traveling in this region you still breathe an air of a remote and forgotten place, and you realize that you have truly gone off the conventional tourist routes.

The populations of the region have kept up to the present day the traditions and the ancestral way of life, so it is very interesting to visit some of the traditional villages, often built on the highest point of the hills, a position necessary to defend themselves from the aggressions of the opposing tribes. The people, very kind and hospitable, live on fishing and agriculture. 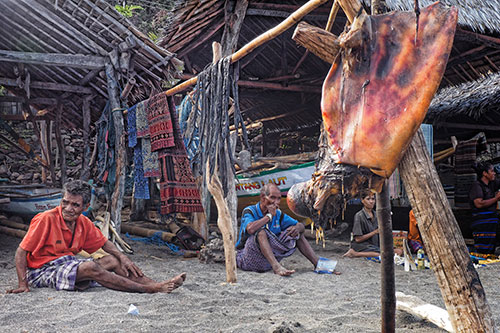 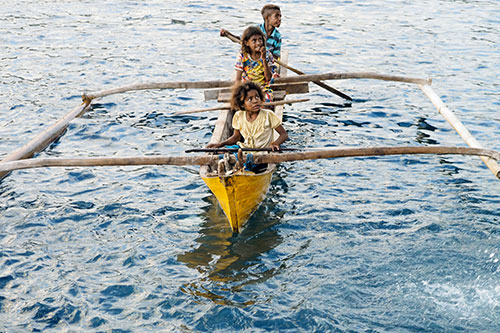 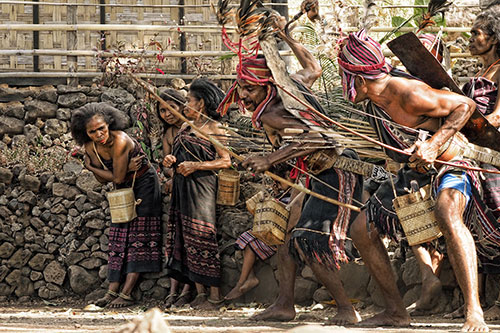 In the villages of Lamalera and Lamakera, live the last traditional hunters of whales and sperm whales in the world. The hunt takes place aboard small wooden boats, the same ones used by their ancestors for centuries and the whales are hit with rudimentary harpoons. These fishermen are exempt from international hunting bans. In recent years, due to the use of outboard motors, hunting has become more aggressive. For some years a solution to the problem has been sought, with the regulation of fishing, through the establishment of a marine reserve.

A beautiful excursion from Maumere to the Kelimutu volcano, which houses in the crater three lakes of different colors blue, green and black, can be reached among beautiful landscapes of rice fields and small villages.

Follow the link and find special offers with the best liveaboards and resorts in Alor. 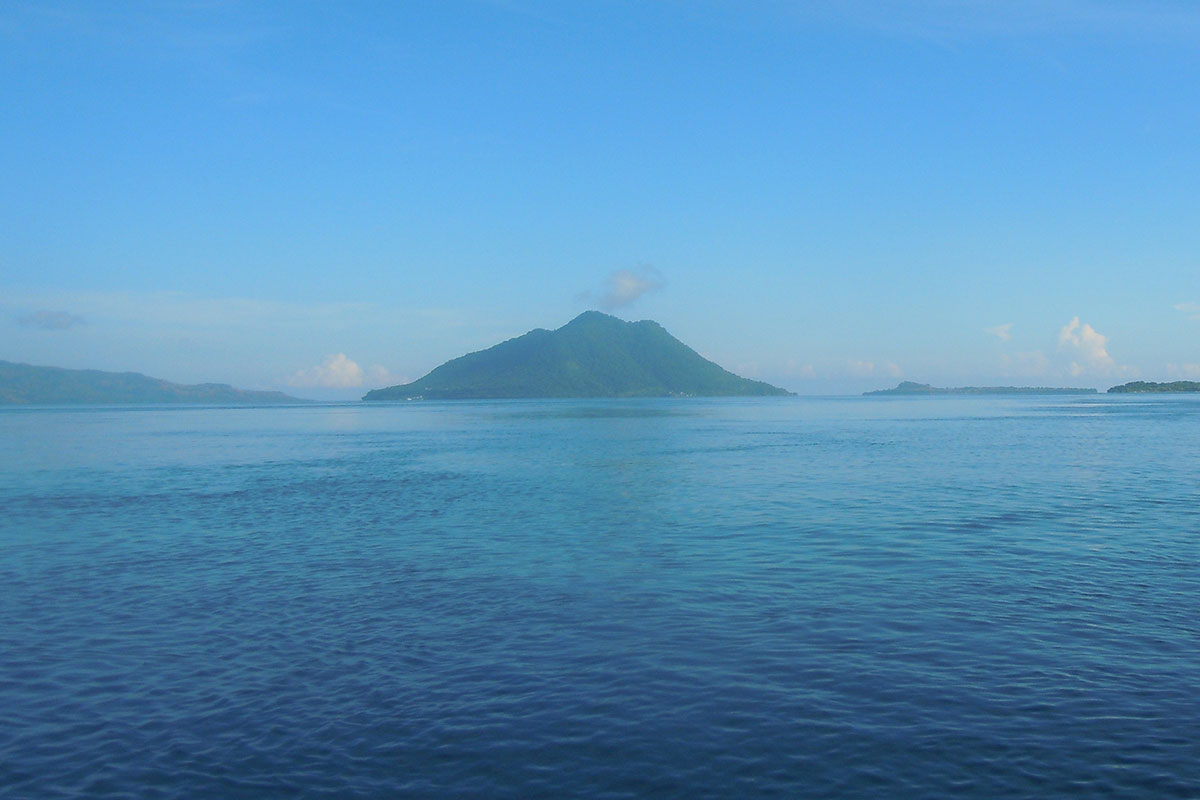