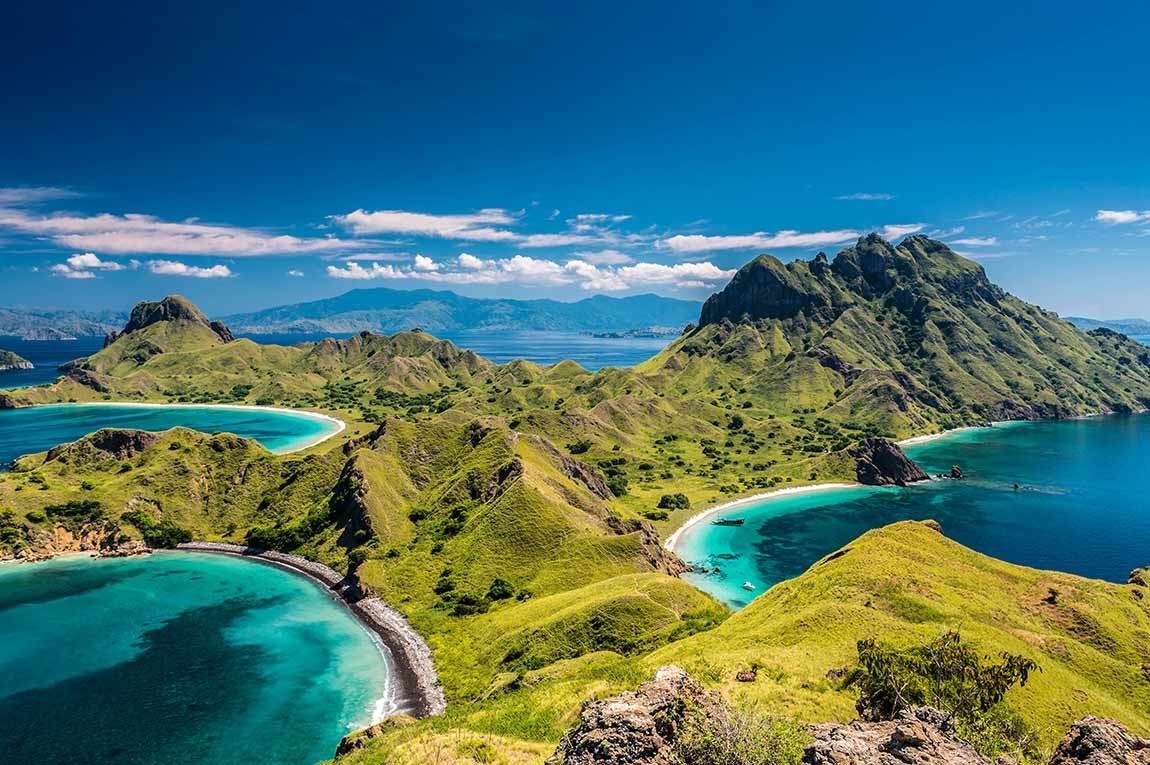 Tour in the Islands of Sumba, Flores and Komodo

This tour visits some of the most beautiful and culturally interesting islands of Indonesia: Sumba, Flores and Komodo, rich in ancient tribal traditions, ancient villages, which seem to stand still, white beaches, jungle-covered mountains, savannas, and seas rich in marine life. Tours of 2-3 weeks, let you know the best of these islands

Sumba, an arid and undulating island, is home to one of the most interesting tribal societies of the Nusa Tenggara Timur, the archipelago of the eastern islands, which revolves around the cult of the marupu (generic term to define all spiritual forces, deities, spirits and ancestors). Sumba, from the morphological point of view, looks very different from the volcanic islands located further north, with a landscape characterised by the presence of low limestone hills, rice fields and fields of corn and cassava. In the most inaccessible regions, the horse is still used as a means of transport: a symbol of wealth and social prestige, along with the buffalo and the pig, once this animal was part of the dowry to be offered to take a wife. Today most of the islanders are officially Protestant, but the cult marupu resists and the old conflicts are still commemorated annually, with simulated battles between courts of knights armed with speared spears. These battles refer to entrenched tribal tensions that occasionally break out between rival clans. The Bahasa Indonesia is spoken everywhere, but in Sumba there are six main languages. Tourism on the island is almost non-existent.

Usually the traditional village of Sumba is structured in two parallel rows of houses, placed one in front of the other, with a square in the middle. At the center of the square there is a stone surmounted by another flat stone, on which are placed the offerings to the marupu protectors of the village. These stone structures for the spirits or katoda are used for the offerings to the marupu of the agriculture during the sowing or the harvest. The village square also contains the tombs of important ancestors, typically finely carved. In former times, the heads of the slain enemies were hung on a spiky pole located in the village square, it is called “the skull tree” and today is still present in some villages, a Sumbanese motif frequently reproduced on the ikat, the typical Sumba fabrics. The characteristic house is a large rectangular structure on stilts that houses an extended family. The thatched roof rises gently from the four sides and ends with a point. Among the rituals that accompany the construction of a house, there is to pay an offer when you plant the first post, to find out if the marupu endorse the location and one of the methods is to sacrifice a hen and examine the liver. Many houses are adorned with buffalo horns or pig jaws, a reminder of the sacrificial offerings made in the past.

Flores is a mountainous island with a volcanic morphology that has shaped its destiny for a long time. A chain of volcanoes crosses it, creating a complex system of valleys in the shape of "V" and ridges that have made the territory impenetrable until a few years ago and this is the reason why they developed various ethnic groups, very different between of them. Although today the Catholic religion is predominant, the indigenous traditions are still very strong. Flores owes its name to the Portuguese who called the easternmost promontory of the cape of the Island of Flores (Cape of Flower).

The Ngada communities are characterised by a peculiar form of traditional architecture that has survived until today. The number of houses (sa'o) and the simulacra dedicated to the male and female ancestors (ngadhu and bhaga) in a given village is determined by the number of clans or families (suku) living there, and must remain constant over time. The ngadhu, are vertical structures in the form of an umbrella, covered with straw. Bhaga are small, home-shaped structures. The architecture reflects the traditional beliefs, with elements, decorations and sculptures of buffaloes, hens, horses, humans, weapons and other geometric forms, each with a specific purpose to protect the inhabitants and ensure a sustainable harmony with the environment, the ancestral spirits and natural forces. Sanctuaries and ancestral tombs are an integral part of village life and often children can be seen playing.

The village of Wae Rebo stands isolated in a beautiful mountain scenery. It is an ancient village of the Manggarai ethnic group, formed by seven enormous Mbaru Niang, round houses with a conical roof and unique architecture. The House of Ceremonies is of a different size compared to the others, it houses drums, gongs and memorabilia. It is the common home of 8 families, descended from a common ancestor, rituals and ceremonies take place there. The structure symbolizes the unity of the clan. The sacred drums are considered the means to communicate with the ancestors. A stay in Wae Rebo allows you to learn about the traditional lifestyle of the inhabitants, dedicated to work in the fields, to the collection of coffee, of which they are excellent producers. Some women weave traditional ikats to the loom. The village can only be reached on foot with a 3-hour trek. The walk is in a narrow path between the dense vegetation of the mountain jungle accompanied by the song of thousands of tropical birds. The night sleeps in the Mbaru Niang, on mattresses padded with pandanus leaves, savouring the experience of living in a common house, under a huge starry sky.

The Komodo National Park, since 1977 "Biosphere Reserve" and since 1991 "World Heritage Site", is a unique marine sanctuary, created by strong currents that carry nutrient-rich waters capable of supporting an incredible range of marine life. The park consists of Komodo and Rinca, the two main islands and many other minor ones, eighty in total and is located between the large islands of Sumbawa and Flores, right in the middle of an obligatory passage for currents and tides that unite the oceans Pacific and Indian. Mangrove forests, grassy backdrops and magnificent coral reefs are the main habitats. Komodo offers world class diving with an astonishing variety of sites, pinnacles, walls, caves, coral gardens and tranquil bays ideal for snorkelling. In the Komodo Park, more than a thousand species of corals have been recorded, seventy sponges, with a particularly high number of coral tubipora, the architect of the beautiful pink sand beaches distributed throughout the park. Turtles and marine mammals frequent its waters and there are occasional whale sightings. The islands of the park abound with wild animals, such as buffaloes, wild boars, flying lizards, tropical birds besides, of course, to the famous varanus that take their name from the island.

A unique sanctuary of marine life

Swept by fierce currents rich in nutrients, the waters of Komodo are a unique sanctuary of marine life offering fantastic underwater experiences for divers. There is nearly a guarantee to see big pelagic species (manta rays, sharks). Komodo offers world class diving with an amazing variety of sites that include pinnacles, caves, wall diving, coral gardens, and quiet bays ideals for macro photographers looking for rare marine life. Ideally for a cruise for snorkelling too.

Dragons and wildlife of Rincia, Komodo and Padar

The islands host a large amount of wild animals including buffalo, deer, wild pigs, flying lizards, tropical birds, sea eagles and of course the world-famous Komodo dragon (Varanus Komodoensis), the biggest existing lizard on the planet, reaching a staggering 3 meters in length and 200 kilos in weight and looking just like it has just walked straight from the age of the dinosaurs. It is a true sign of the remoteness of Komodo National Park that the Komodo dragon only became known to the western world in 1912. All cruises include a short trek inland to spot the dragons.

Another must is "Komodo's Flying Fox" a phenomenon unusual to add to the extraordinary beauty of the sea water that glowed golden in the evening sunshine in Komodo National Park. At Kalong Island when the sun sinks, the thousands of bats living between the mangroves growing in the island cover the golden sky of Labuanbajo, coming out of their nests and flying to East in search of food. This spectacle occurs at the sunset and you will see thousands giant bats of the fruit, emerging from the mangrove island of Kalong in Flores before flying towards the island of Rinca in the Komodo Archipelago.

Dive with Mantas in Komodo

Indonesia is a crossroads between the Indian Ocean and the Pacific Ocean with thousands of amazing dive sites, among these are three major areas known for their seasonal population of manta rays: Komodo, Bali and Raja Ampat. Particularly Komodo has a number of sites where you can regularly encounter manta rays and even oceanic mantas -manta birostris- all year around, even if the manta season in Komodo runs from October to November. There are 2 known dives site where is possible dive or snorkelling with this amazing animals Karang Makassar in Northern Komodo and Manta Alley in Southern Komodo. It is very import follow the guidelines for encounters with mantas, then divers and snorkelers can observe and photograph the mantas but without interfere in their regular cleaning ritual. Diving with mantas will be one of the greatest experiences you can have in Komodo.

Visit Komodo National Park or ask for a personalised tour in Sumba, Flores and Komodo