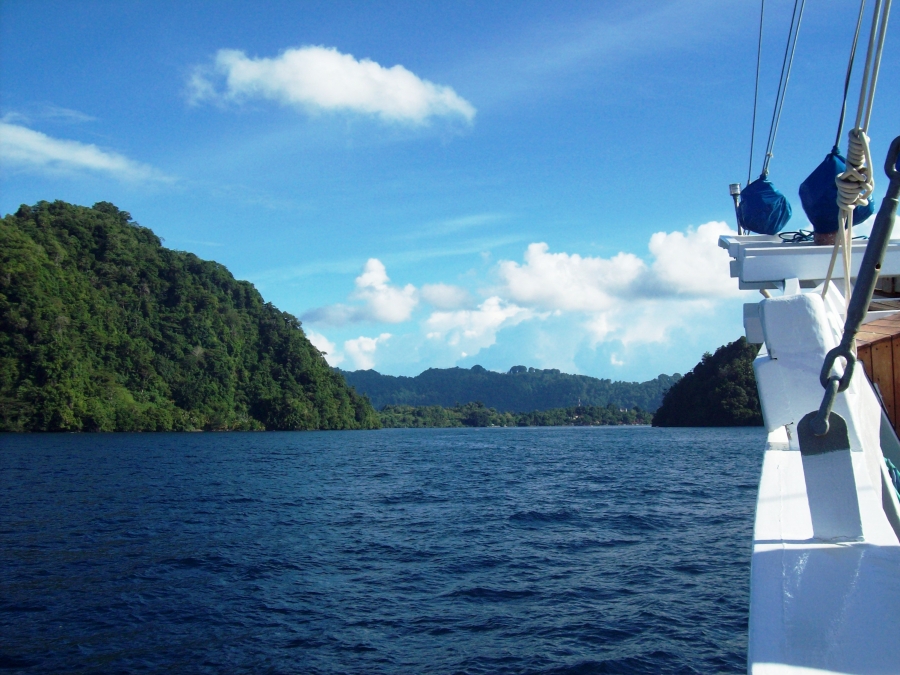 The Ring of Fire: Flores and Banda | Cruising Indonesia | The Liveaboard and Dive Specialists

The Ring of Fire: from Flores to Banda Sea

This liveaboard cruise traverses a wide range of Indonesian geological landscapes, from volcanic islands to limestone pinnacles developed from ancient coral reefs. As we sail along the natural migratory routes of whales and dolphins, our voyage from Flores Island to the Banda Islands guarantees amazing diversity and beauty both above and below the water. The Flores and Banda Seas are blessed with some of the best diving in Indonesia. Politically the islands of Flores and Alor belong to the Nusa Tenggara region, physically instead to the Banda Sea Plate, a marine ecoregion of the Coral Triangle, where the passage of blue, Omura and blue pygmy whales have been documented. 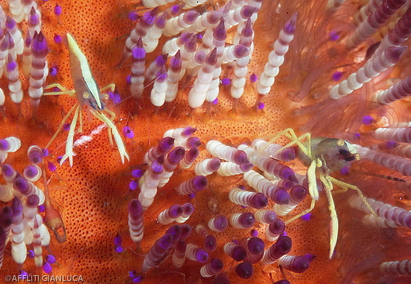 Maumere harbour offers some of the most amazing and diverse dive locations in the world. Under the pier we can find razor fish, different species of pipefish, seahorse, frogfish, scorpion fish a wealth of colorful nudibranchs plus schools of barracuda and batfish. Maumere always provides the perfect setting to start or end a memorable dive cruise, not by chance in recent times it has served as a port of departure or arrival on many cruises to Komodo or Alor.

Whereas Kavula offers crystal blue water diving and spectacular overgrown drop-offs, the island of Pantar shows its best side for the night dive. Between dives there is the opportunity to visit one of its traditional villages lost in time. 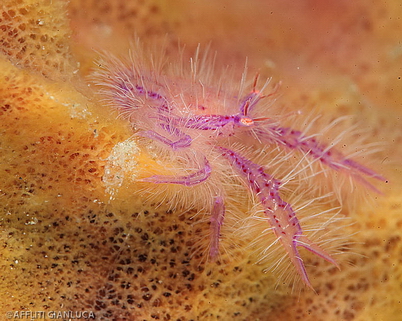 The Alor Strait is another landmark on the Indonesian dive map. Sitting dramatically in the strait between the two large islands of Pantar to the west and Alor to the east are three small, long-extinct volcanoes, the largest of which rests on the evergreen island of Pura.

Pura is one center for traditional weaving and the islanders here are Melanesian in ethnicity with dark skin and tight curly hair. Not only does Pura offer pristine reefs, each village protects the reef on its shores and practices a sustainable fishing system of traditional fish traps and spear fishing, but also the opportunity of seeing the spear fishermen carrying out their trade. The men and kids -and also now the girls in their canoes-, are a delight, diving down up to 20m on occasion, to tend the traps or shoot a nearby reef fish. They also make willing underwater photo subjects. There are also great opportunities to take split shots of the small outriggers with the spear fishermen hunting below. 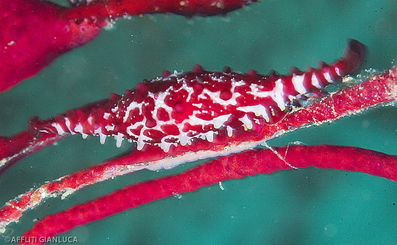 Here we have many different diving options. Whether you prefer drifting along coral encrusted walls, sloping reefs in crystal clear water or hunting for nudibranchs and ghost pipefish there really is something for everyone.

On the north coast of Alor we have a dive site where you will be completely surrounded by fish life. Steep slopes and drift diving on the current bring in the big fish on to this beautiful reef. Certainly good enough for a second look!

The west coast of Wetar boasts amazing dive sites with drop-offs, colorful reefs and abundant fish life. Here there is a good chance to see some pelagics. Mind your depth as you swim over the edge in deep blue water as we are many miles away from civilization!  Along the north coast we have regular sightings of dolphins and whales, often just a few meters away from the dive site! 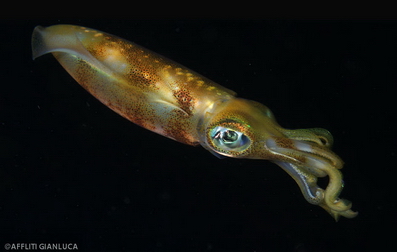 The terrain slopes into the blue Banda Sea inviting you to swim amongst gorgonian fans, huge sponges and rainbow coloured soft corals. Keep your eyes out in the blue for tunas, Napoleon wrasses and sharks. Some of the spots around Romang are influenced by volcanic activity and provide great night diving where we can see Spanish dancers and fascinating bobtail squid.

Starting from the shallow reef top to the deep here is amazing coral growth and diversity. As you take in this natural wonders the diver will be watched by the inhabitants of the reef and passing pelagics. The fish are still curious here because it is so rarely dived.

Here we dive another volcanic island which rises out of the deep Banda Sea, far out in the open ocean. Life is sparse on the island but underwater the steep walls are covered in corals you will experience a wonderful dive. On the night dive we have a good chance to see the shy Sarong shrimp.

Is it the island of sea snakes or the island of sea birds? This island has two unique things to offer. Thousands of seabirds inhabit the island, from frigate birds to blue-footed boobies; it’s a spectacle you will enjoy. Underwater sea snakes are present by the dozen and if we are lucky we’ll see them hunting in a pack. But also the reefs along this island are beautiful, a mix of walls and slopes with corals in all colors and sizes. And as if all that weren't enough, in the middle you can always see some sharks, tunas and jacks. 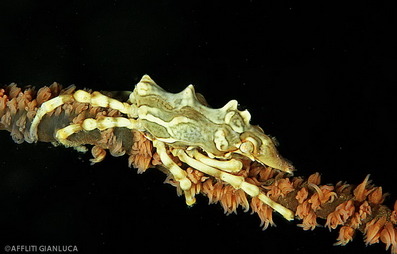 In the north of Gunung Api is a remote archipelagic atoll named Lucipara. These atolls are also surrounded by a seafloor that is 4000m below and consisting of three large islands and a few tiny reefs that just break the surface.

The islands offer vertical walls and visibility of over 30-40m with very mild currents. They are also home to a population of the large sponges. Some barrel sponges can swallow a diver in their orifice without difficulty.

Gunung Api o "Fire Mountain" is a volcano that’s summit breaks the sea’s surface by 240m yet which has its base on the seabed some 40000m below.

The island created by the volcano is 120 miles from the next nearest landfall and is therefore home to the reef fish that populate its steep drop offs and walls, occasional visiting pelagics, and extraordinarily an uncountable population of banded and olive sea snakes. These marine reptiles have found a sanctuary here among the warm volcanic vents and reef fish that live in the area. It is truly a unique spot that never ceases to amaze divers. In some shots there are over thirty snakes in the frame and they make inquisitive yet docile subjects.

Banda had an important place in Indonesian and world history. Dominated by the active volcano Gunung Api, for more than three hundred years these tiny islands were the center of wealth for the Dutch colonies. They were the only source of the rare spices of nutmeg and mace for centuries, and the Dutch after capturing them from the Portuguese, guarded them jealously from all comers including the English. For centuries, a kilo of these spices held more value than the same weight in gold. The old fort, the governor's house, the church, nutmeg plantations, are well worth visit and bring us back to colonial era. 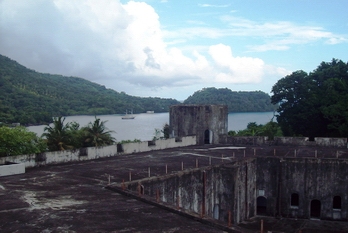 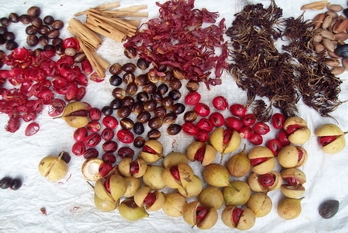 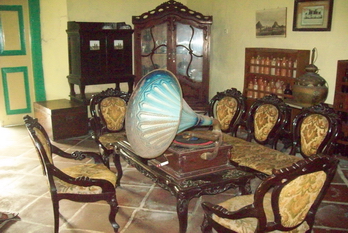 Let's not forget the diving, both Pulau Run and Pulau Ai have pristine clear waters, lovely walls and good fish life, we might go a bit deeper in search of more hammerheads, big fish can be seen here as well, napoleons, schools of black snappers, bumpheads, etc. 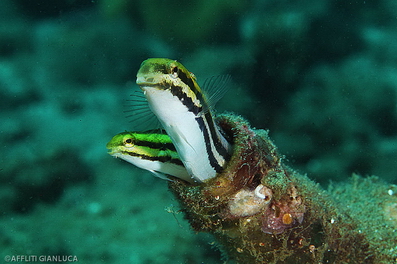 The outer reefs of Bandaneira are full of marine fauna of all colors and shapes. Schooling fish gather and the macro life is rich. A really unique area is the dive under the pier of Bandaneira. The size of the mandarin fish are just out of this world and if you are looking for other critters, cockatoo wasp fish, flying gurnards, frog fish, juvenile barramundis, juvenile emperor angle fish, juvenile sweetlips.

A bit south is Hatta, consisting of an underwater coral garden with a friendly school of bumpheads and some white tips among its highlights.

Those who are fit and want to get up early, can climb the volcano Gunung Api to watch the sunrise.

Of course diving is our main focus and the dive site Lava Flow is not to be missed. 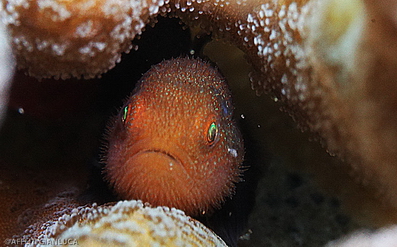 Twenty years ago Gunung Api erupted and the lava poured into the ocean and in the short time since a hard coral garden grew which is unrivalled in the world.

The Acropora or table corals are over 5m width, staghorn corals as far as the eye can see and even endemic species found nowhere else is just a sample of what you can see here.

The diving around the island is great, the wreck in the bay is full of life, pilot whales sometimes come close to the pier, but without a doubt Laha offers the best diving and is an unforgettable experience.

Laha could be compared with Lembeh, it is pure muck at its best: mimics, flamboyant cuttlefish, rhinopias, ribbon eels, Ambon scorpion fish, frog fish by the dozens, ghost pipe fish... you name it, it is all there. Photographers... get ready.

Diving season: From March to April and from October to December. The months of March and April, and mid/late-September to early/mid-December are the best times for diving in the Banda Sea, based upon surface conditions. Rainy season: From January to February and from June to August. Water temperature: 25-30°C. A 3mm shorty should be sufficient. If you feel the cold easily a 5mm shorty is advisable. Visibility: 8m-30m. Depths: 5- >40m. Currents: Can be strong. Surface conditions: Can be rough in Maumere and Alor. Experience level: Intermediate – advanced. Dive sites: >65. Length of stay: Recommended 10-16 days on liveaboard cruise.

Airport: Arrival Airport Maumere. Departure Airport Ambon. International flights reach Bali or Jakarta, then domestic flight to Maumere. From Ambon domestic flight to Bali or Jakarta connecting international flight. Weather: 27-32 degrees. Indonesia has two seasons: wet and dry. In most of Indonesia the wet season is from October to April and the dry from May to September. Banda Sea wet season is from May to September. Time zone: Lesser Sunda Islands GMT +8.