The characteristic of the Banda Sea is the depth that reaches in some points up to over 7.000 m, the dives are almost all in the wall. Small islands, often volcanoes, are found on rocky bases whose walls plunge hundreds of meters into the blue. The Banda Sea is the kingdom of the pelagic. Giant groupers, tuna, trevally, napoleons, sharks, and especially in the right season, hammerhead sharks. Nature at Banda Sea is oversized: huge sea fans, massive barrel sponges, and thick schools of fish. As always in Indonesia, there is no lack of color and macro, beautiful coral reefs full of life, soft and hard corals, gorgonians and in the bay of Ambon, black sand dive in search of rare marine species like the extraordinary Rhinopias. 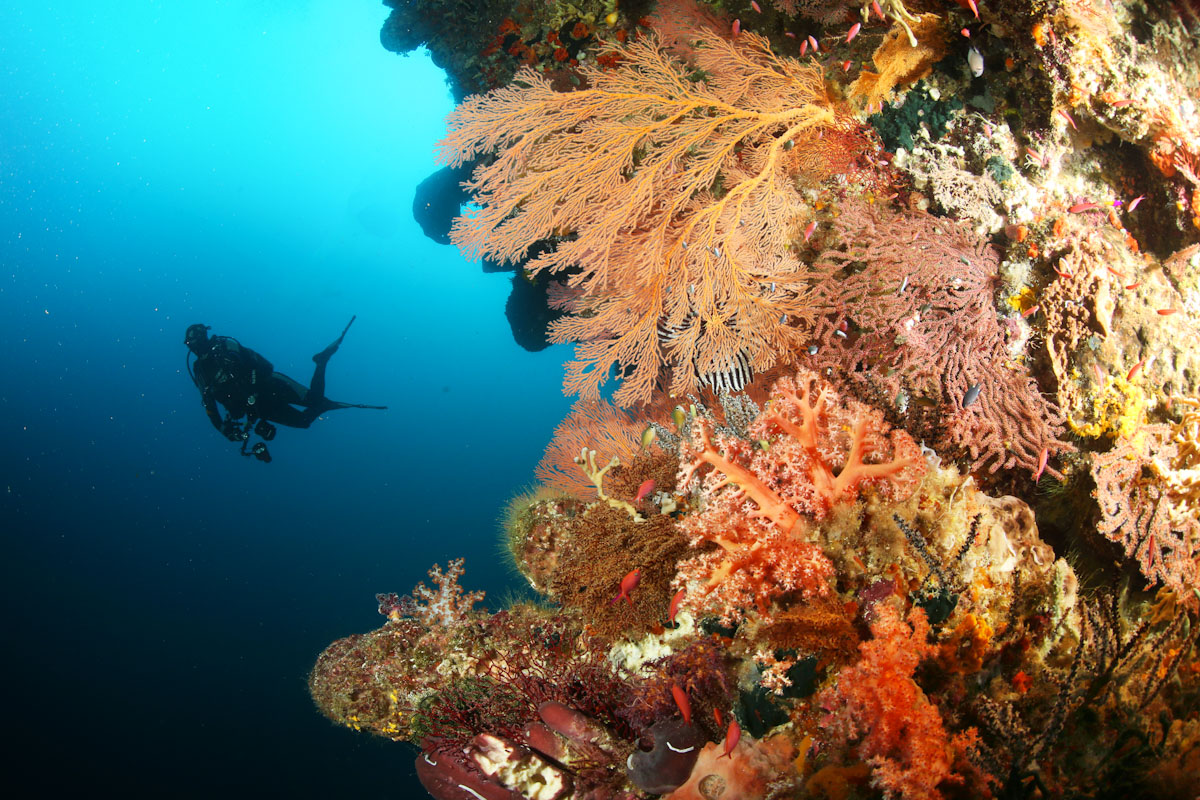 The Scuba Diving Crossing of Indonesia 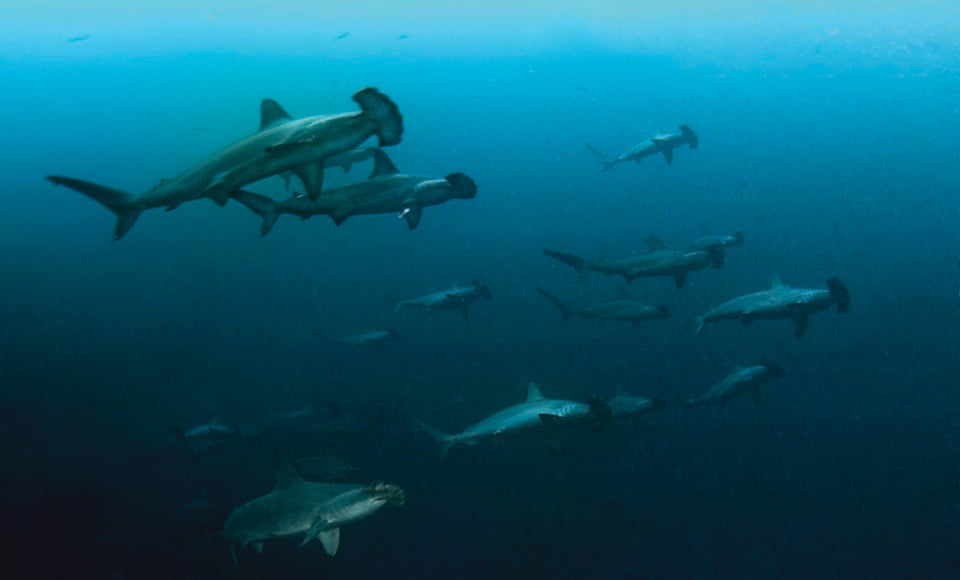 Due to the difficult and dangerous conditions during the monsoon season, the only ideal months to visit the Banda Sea are the transitional months between two monsoons, from October to November, and from April to May. At the beginning of October, the coldest water allows you to meet hammerhead sharks more easily, November is the month with the calmest waters, in which the sea is often a large flat table that reflects the white clouds as in one mirror.

Diving season: October and November. April and May. Rainy season: December and February. From June to August. Water temperature: 25-30°C. Visibility: 20-50m. Depths: 5 -> 40. Currents: Mild, but can be strong. Surface conditions: Diving is easy at the right times, with mild currents, good visibility and calm waters, only some diving spots are subject to strong currents which make them suitable for experienced divers. Diver level experience: All levels. Dive sites: >50. Length of stay: Recommended 12-15 days on a dive cruise.

Banda Sea is a dive destination accessible only on a liveaboard. 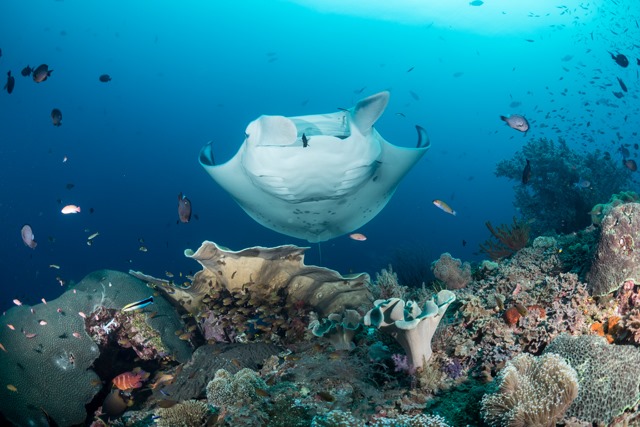 Cruises that cross the Banda Sea depart and arrive in some cases from other regions of Indonesia, combining two very coveted destinations in a single trip. The most fascinating in particular are the coupled with Raja Ampat and Triton Bay in West Papua. These are dream trips, which allow, if carried out at the right times, to enjoy sightings of all kinds of marine species, from the critters of the Ambon Bay, passing through the mantas, pelagic and hammerhead sharks of the Banda islands, to get to the impressive biodiversity of Misool and Dampier in Raja Ampat, or some fantastic diving with the whale sharks of Triton Bay.

Airport: It will depend on the itinerary of your liveaboard. The departure and arrival ports of these cruises are: Ambon, Saumlaki, Kaimana and Sorong. In other cases: Maumere, Alor, Tual. In all cases, the towns where the ports of embarkation and disembarkation are located are connected with domestic flights from Jakarta or Bali, which can be reached with international flights. Weather: The climate is decisive for scheduling a diving cruise in the Banda Sea -see diving season-. Time zone: Lesser Sunda Islands GMT +8. Maluku GMT +9. Transit night & connecting flight: You may need to spend one night in transit in Indonesia before and/or after your cruise, depending on your domestic and international flight schedules. We have the most competitive airfares with the most convenient flight timetables, and hotels for all budgets.

Does it seem complicated? Contact an operator who speaks your language and who can assist you in Indonesia. Feel free to contact us now!

3. DIVING IN THE FORGOTTEN ISLANDS 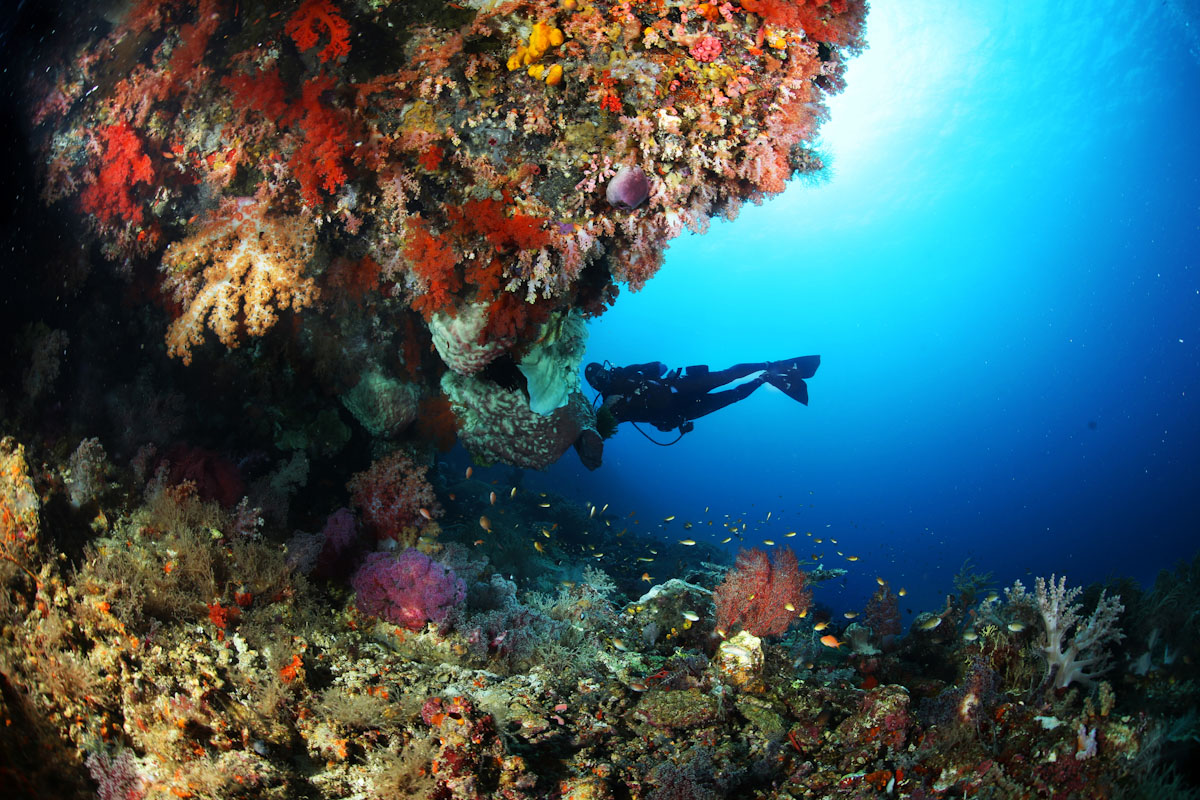 The Forgotten Islands form a long chain of islands and atolls that are part of the South Moluccas. The entire region stretches for over 600 km from Wetar to Tanimbar, following the inner and outer Sunda volcanic arc, in the far south of the Indonesian archipelago. Remote and sparsely populated, the Forgotten Islands have remained largely isolated from the rest of Indonesia and the world. The deep sea, the lack of anchorages and shelters make them accessible only from liveaboard and only in certain periods of the year in October / November and April / May, when the sea is calm and the wind is absent.

The remoteness and the difficulty of access have made it possible to preserve a considerable wealth of marine life. The walls are completely covered with corals so dense and intertwined that you cannot insert a finger. The corals, soft and hard, are a marvel for the eyes of the few divers who venture into these waters. The fauna consists of trevally, napoleons, giant groupers, horned parrots, sharks, hammerheads, and all types of reef fish. The macro is abundant, the color of the reefs amazing. In very few places is it possible to find such pristine reefs.

The Forgotten Islands is a dive destination accessible only on a liveaboard.

The different travel itineraries offered include some of those "Forgotten Islands" in combination with other islands in the Banda Sea.

The Forgotten Islands and other islands of Banda Sea

This itinerary only partially follows the previous one, connecting Saumlaki to Ambon, and visiting the eastern part of the Forgotten and then heading north along the islands that form the so-called Ring Of Fire, the ring of fire formed by volcanoes emerging from the ocean depths. We visit two atolls, Nil Desperandum and Karang Dulsburg where schools of hammerhead sharks are often encountered.

Hammerhead sharks and pelagic can also be seen in the islands of Serua and Run, in Banda, while in Manuk you can dive among numerous sea snakes, which proliferate in the waters of the island thanks to a particular microclimate.

In this itinerary we also visit the historic islands of Banda, where in the past centuries nutmeg and clove grew, the only place in the world, spices that made Dutch merchants rich.

Other "gems" of the trip are the island of Soangi, with hammers and pelagic; Nusa Laut, whose reef is carefully guarded by the villagers of Ameth; and black sand diving at Laha in Ambon Bay, a paradise for critters, including the very rare Psychedelic frogfish.

4. DIVING IN THE RING OF FIRE

The cruise between the Lesser Sunda Islands and the Banda Sea traverses the vast range of landscapes and geological formations, passing from volcanic islands to limestone or karst pinnacles, where centuries of isolation and remoteness have developed ancient coral reefs. Navigating this migratory corridor and playground of dolphins, whales and other marine mammals, we will be overwhelmed by the wealth of marine life and beauty both above and below the water while enjoying some of the most beautiful dives in Indonesia. Be ready for unexpected whale watching.

The journey begins in Ambon, the historic capital of the Moluccas, and then arrives in Nusa Laut, before reaching the Banda Islands, strategic overseas colonies of the 16th and 17th centuries. Notoriously known as the "Spice Islands" they were the cause of wars between the British and the Dutch who disputed control.

The cruise can follow different itineraries, depending on the span of time available, the most direct line passes through Lucipara and Gunung Api, remote and isolated in the sea of ​​Banda, then Wetar and to finally reaches Alor or Maumere on the island of Flores, passing through Maisel for a dive unforgettable.

The second option is to take a wider loop along the necklace of small islands located in the center of the Banda Sea: Manuk, Serua, Damar, Romang, Wetar and Alor. Do not miss the atolls of Nildesperandum and Dulsburg and the island of Serua to spot Hammerhead shoals.

The Ring of Fire is a dive destination accessible only on a liveaboard.

The Ring of Fire Itinerary

THE RING OF FIRE

5. DIVING IN THE BANDA ISLANDS 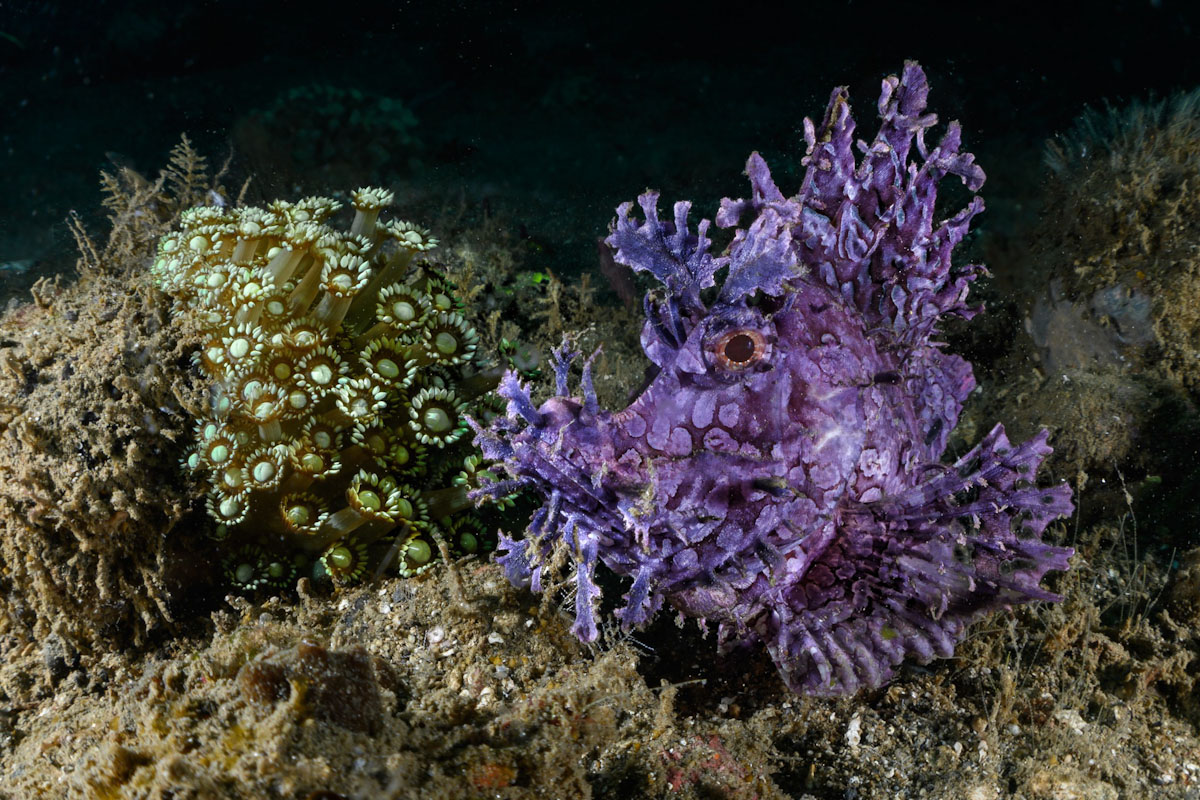 The captivating Banda Islands alone constitute an itinerary of fantastic diving to be enjoyed on a liveaboard.

Dominated by the active volcano Gunung Api, the Banda Islands were for 300 years the source of wealth for Holland, which ran the world spice monopoly. Nutmeg, clove, and cinnamon grew only on these islands and were sold in Europe at very high prices -300 times the price paid in Ambon-. It can be said that the most beautiful buildings in Amsterdam were built with the wealth accumulated from this trade.

The attraction of these islands is not only diving, but also the visit of the ancient colonial houses, churches and forts that have remained intact for centuries.

Most of liveaboards include the Bandaneria Tour in their cruise programs. 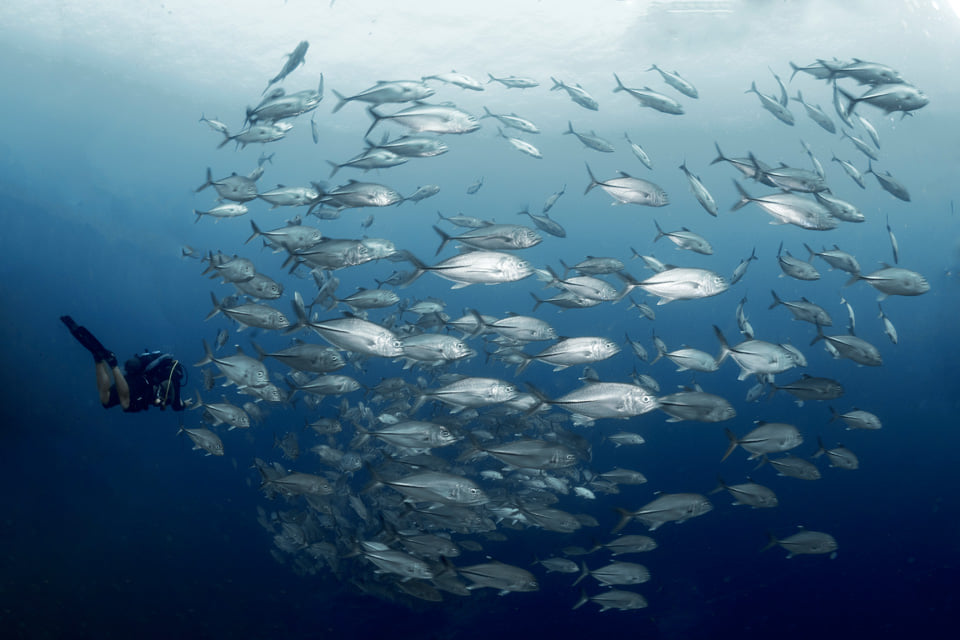 Port of departure and arrival for many itineraries of diving cruises in the Banda Sea, is Ambon Bay. The diving around the island is great, the wreck in the bay is full of life, and without a doubt Laha offers the best muck diving, being a must for lovers of critters: mimic octopus, wanderpus, flamboyant cuttlefish, Ambon scorpion fish, frog fish, ghost pipe fish, and Rhinopias in unimaginable hues.

Run and Ai islands have pristine clear waters, wall diving and lot school of carangidae fish, we might go a bit deeper in search of more sharks, big fish can be seen here as well, napoleons, schools of black snappers, and bumpheads. The outer reefs of Bandaneira are full of marine fauna of all colors and shapes. Schooling fish gather and the macro life is rich.

A bit south is Pulau Hatta, an underwater coral garden with a friendly school of humphead parrotfish and some white tips among its highlights. 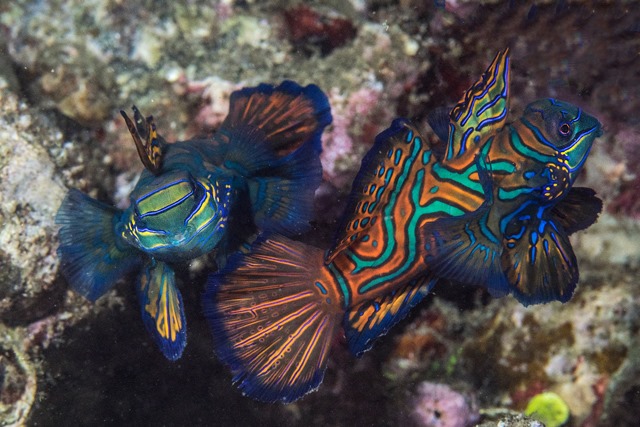 Pulau Api, also known as Gunung Api -but not to be confused with the submerged volcano known as "Mountain of Fire" or Gunung Api of Lucipara Island Group-, offers the iconic dive site Lava Flow. Twenty years ago Gunung Api volcano erupted and the lava poured into the ocean and in the short time since a hard coral garden grew which is unrivalled in the world. The Acropora or table corals are over 5m width, staghorn corals as far as the eye can see and even endemic species found nowhere else is just a sample of what you can see here.

A really unique area is the dive under the pier of Bandaneira if you are looking for other critters, cockatoo wasp fish, flying gurnards, frog fish, juvenile barramundis, juvenile emperor angle fish, juvenile sweetlips. Diving on the black sand and under the piers of the ports offer surprising encounters. Plunge at sunset at Banda Neira dive site to record the loving courtship of the Mandarin fish.

The Banda Islands is a dive destination accessible only on a liveaboard.

6. DIVING IN THE KEI ISLANDS

In these islands, which have long been known above all for the most beautiful white beaches in Indonesia, they have proved -as often happens in this immense archipelago-, to be repositories of excellent diving spots, with a great potential for sites yet to be explored. The dives offer sightings of Napoleons, sharks, horned parrots, trevallies, sea eagles, many sea snakes. Large coral formations, gorgonians, with excellent macro. On the surface, Kei is the quintessential dream beaches. In the picture: Kei dreamy atoll.

The Kei Islands is a dive destination accessible only on a liveaboard.

The crossing from Banda to Raja Ampat is a once in a lifetime trip. You will explore remote paradises in each island visited and experience the rich culture of the Spice Islands. Bandeneira, capital of the Banda Islands will be without doubts the star of this cruise: the Dutch old fort, the governor's house, the church, nutmeg plantations, are well worth visit and will bring us back to colonial era. Did we mention the diving, snorkeling, or swimming in pristine and secluded marine environments? Yes, of course! 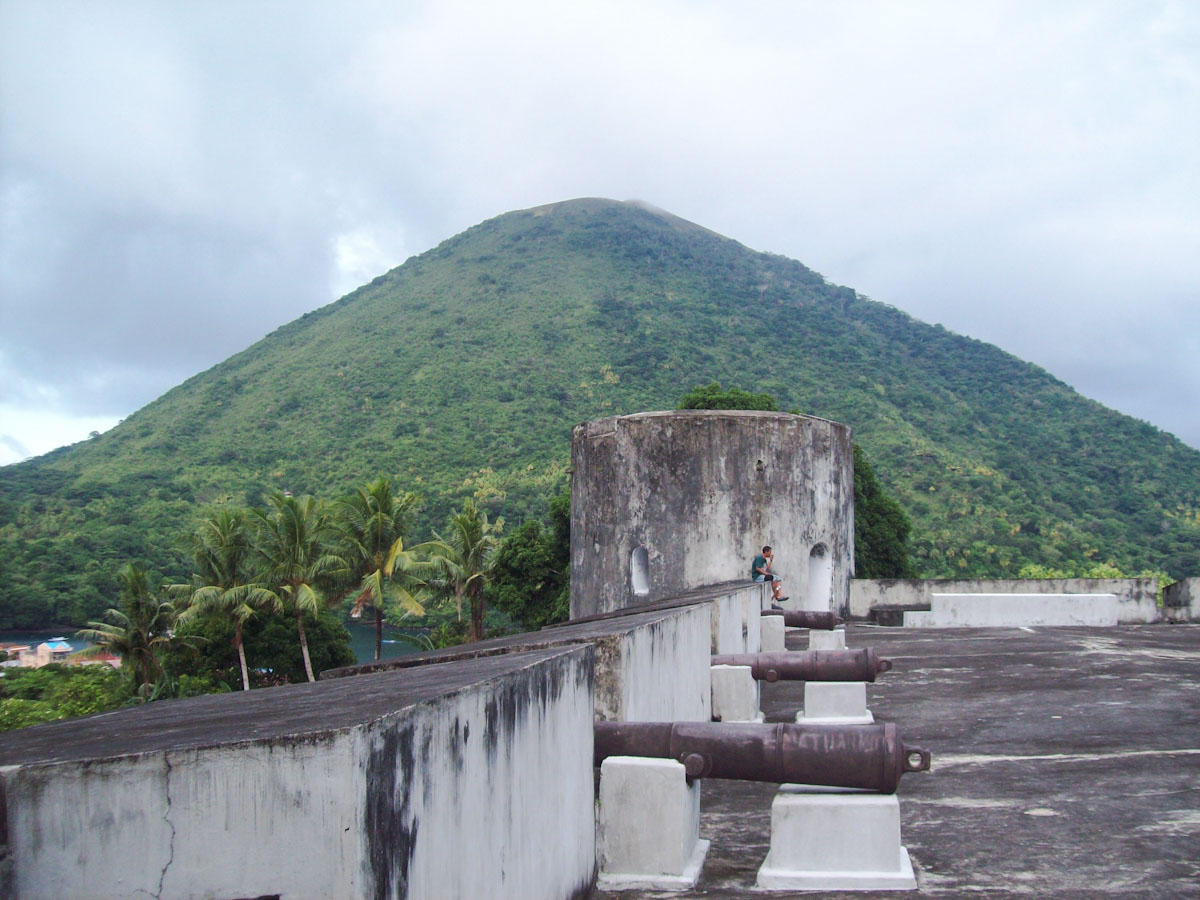 Plan your Private Charter with our list of things to do for non divers in Banda Sea:

• Climb Gunung Api, a 620 active volcano at sunrise for a rewarding views of Banda Islands

Cruising Indonesia is committed to ensuring you not only a perfect diving holiday but also the best price guarantee. Contact us and we will arrange everything you need: every single details of your cruise reservation, the international & domestic flights, the ground services, an amazing tour extension...